Here, I continue to discuss the real secrets of the intuitive or psychic reading of Tarot cards. I will also continue our discussion of Palmistry by looking at the basic shape of the palm.

This section I aim to make this distinction crystal clear.

In previous Newsletters, I instructed you to select three (and only three) meanings for all the Tarot Cards. These should be the three meanings with which you can most readily identify. Well, for reversed card meanings, you need to select one (and only one) method of interpretation of the reversed card. These methods are outlined below. Once again, you must select the method with which you feel most comfortable and can most readily identify.

An upright card has a positive or neutral impact on the client's life. A reversed card, by contrast, has a negative impact on the client's life. The reversed card's meaning is the same; it's just the impact that differs. Here is an analogy. Suppose a woman's doctor informs her that she is pregnant, that is, her symptoms mean she is pregnant. Now, if the woman has been trying to conceive for many years, is in an older child-bearing age-group, is financially secure and is in a happy relationship, then the event will have a very positive impact. However, this same event would have a negative impact on a younger girl who had been very drunk at party and had been seduced by an unknown stranger! Same meaning - she is pregnant – but a very different impact!

Let's use 'The Fool' card for another example. 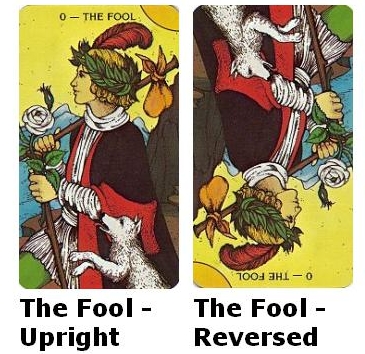 If you recall from a previous newsletter, one of the meanings of 'The Fool' is that the client is feeling restless, bored and looking for travel, fun and adventure.

If the Fool card is upright it means that these are good things. Perhaps the client is living a boring, unadventurous life. Perhaps they are someone who is too serious, too gloomy, all work and no play.

However, if the same card was reversed, it still means that the client is feeling restless, bored, and adventurous, but the impact is not necessarily a good thing. Perhaps the client is studying for final exams so they can complete a 4-year college degree. Now is not yet the time for fun and play!

Method 2: A reversed Tarot card has the opposite meaning to an upright card meaning.

In this method, you simply take the opposite meaning of what an upright card would indicate.

For example, an upright Fool can mean someone is innocent (remember the white rose?). Therefore, a reversed Fool means that a person is guilty.

Method 3: A reversed Tarot card indicates an early or developing stage of an upright card meaning.

Here, a reversed card indicates that events are moving towards the same meaning as an upright card but the process is not yet complete.

Method 4: A reversed Tarot card indicates a weakened or milder form of an upright card meaning.

A reversed card has the same meaning as an upright card, except it is in a milder, more moderate form.

Method 5: A reversed Tarot card indicates the client is ignoring or denying the significance of an upright card meaning.

A reversed card indicates that the client is ignoring or denying the person, energy or event specified by a card. They are acting like ostriches, sticking their heads in the sand.

Method 6: A reversed Tarot card indicates that the client should avoid the significance of an upright card meaning.

The meaning of a reversed card is the same as an upright card, but the client should avoid the person, energy or event signified by the card.

For example, an upright Fool card can indicate that a person is starting a new phase in his or her life. Do remember to look at the cards that the Fool is looking at and the cards he is turning his back towardsto get specific details on where the Fool is going and what he is leaving behind. A reversed Fool card means that a person should avoid starting a new phase or project entirely or until he or she has completed old tasks and ties up all the loose ends.

Method 7: A reversed Tarot card is trying to get the Psychics attention.

The reversed card is calling attention to itself. It is saying, "Look at me! I'm an important card in this spread!" You must read every other card in conjunction with the reversed card. I will cover 'Reading groups of cards' in later issues of this newsletter.

Method 8: A reversed Tarot card indicates an absent, lacking or deficient energy or event of an upright card meaning.

A reversed card is saying that something is missing. This is not the same as an opposite meaning.

For example, an upright Fool card can indicate the client is feeling restless, bored and adventurous. A reversed Fool card can therefore indicate that restlessness, boredom or lack of desire for adventure is missing in the client's life. Putting this positively, the client needs to calm down, be more content and appreciate what they already have, etc.

This method is of limited use. It is only useful in spreads or questions that involve a yes/no answer. However, many clients do ask yes/no questions.

In summary then, select one of the above methods - and one method only - for reading reversed cards. Use that method consistently – for at least 100 readings - before using another method.

The key to success in Tarot reading and psychic development is consistency.

Tarot Card of the Month: The Magician 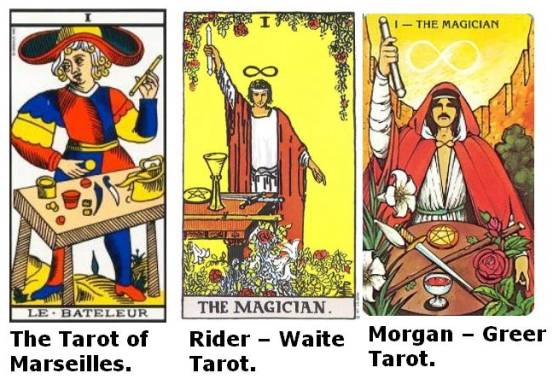 There are two different types of 'Magicians'. One type practices magic (magic ending with the letter 'c'), and the other practices magick (which ends with a 'ck').

You need to understand both types of magicians to fully understand the meaning of the Magician card.

A magician who practices magic is a trickster and an entertainer. He uses sleight-of-hand, misdirection and magical props to amuse an audience. To be a successful a magical entertainer requires charisma, self-confidence, independence, acting skills, good communication skills and endless practice. He makes his living using his wits and his skills. (These traits are commonly assigned to the God Mercury, who was an excellent communicator and the God of thieves!)

A magician who practices magick (ending 'ck') seeks to use supernatural forces, willpower and determination to make his wishes come true. He creates miracles. He makes things happen.

The number 1 is the first whole number, thereby indicating a beginning. Also, the magician has worked hard and studied hard in order to become a successful magician.

If you use willpower, determination and action, your wish will come true. In other words, you need to plan what you want to do, and then do it.

This card often shows up when clients are faced with a tough challenge that they are avoiding.

Your life will improve only if you become assertive, self-confident and develop a positive outlook in life.

Look at the picture. A magician who practises magic tricks to entertain others must be self-confident and positive in outlook. Also, note the red cloak. Red is considered an assertive and self-confident colour. Also note the red rose, which indicates passion – the magician is very passionate about what he does.

You need to focus on one goal at a time. Complete this goal, and then move onto the next goal. Avoid distractions. This card often shows up when a client is focussing on too many goals at once. They start too many things, and finish nothing.

Look at the picture. The magician only has one item in his hand (the wand). He is ignoring the other items on the table for the time being (the sword, another wand, the pentacle and the cup). He is focusing on one thing at a time.

A good person. A person of pure motives. Honest. Genuine. Sincere. This card often shows up when a client asks "Is the person I have just met honest?" If the magician shows up, the answer is yes.

Look at the picture. Notice the wand to pointing up to the sky. Imagine the wand is conducting power from God, and this power is flowing to the magician. Assume that God is good. Also, note the white flowers in the picture, as well as the magicians white shirt. White indicates purity.

You need to become more independent. Rely on your own skills and abilities. Do not depend on other people too much.

Look at the picture. The magician relies on this own skills and abilities to perform his tricks, not on other people. Also, think about the number 1. The number 1 stands alone. Also think of the common saying "looking after number 1".

This card can indicate a skilled tradesman or a craftsman. This person is significant in the client's life. It could be anyone who uses their hands to produce or repair items, e.g. a carpenter, painter, motor mechanic, jeweller, tailor, etc.

A magician must be highly skilled with his hands to perform tricks convincingly.

This card indicates a person significant to the client. This person is an excellent communicator, a smooth talker, charming, charismatic, clever and witty. This person is very persuasive, a natural salesperson, and has good business sense.

Think of a top magician who is smart, charismatic and persuasive.

This card can indicate an interest in the occult, the mystical, the supernatural or the paranormal.

Let's look at the significance of the basic shape of the palm.

Look at your hand. Look at the width and length of your palm.

Look at the actual palm, not the fingers!

Measure the width of your palm from the point where your little finger joins your palm. Measure straight across using a ruler.

Is your palm square or long?

These people like order in their lives. They make decisions based on facts and rational, objective calculations.

This type of palm is more common in men than in women.

Long-palmed people perceive those with square palms as being too predictable and somewhat boring. 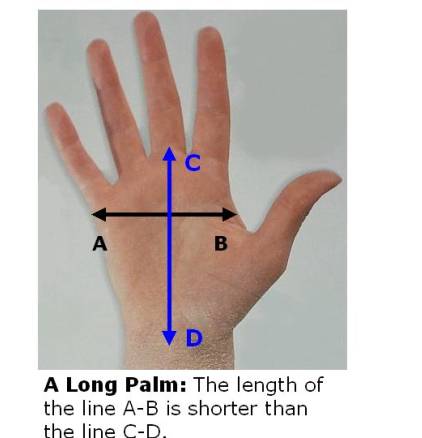 These people are moody. They make decisions based on their "gut feelings" and intuition.

Feelings dictate everything in this person's life.

This type of palm is more common in women than in men.

Square-palmed people perceive those with long palms as being unpredictable, fussy and moody.